A pre-sail meeting at the Wardleys Marine Yacht Club on a wind and rain swept Saturday morning wasn’t enthusiastic  for a  planned Morecambe Bay crossing.  Talk of F8 winds and atrocious conditions in the Irish sea  eroded the once rock solid resolve to get out after several weekends of bad weather. Three  skippers, having made plans via a flurry of texts, were originally set to go.  By the end of the meeting only one boat was still up for it – helped by a phone call to the Ship Inn in which Sheila, the landlady, confirmed a warm welcome was awaiting any adventurer daft enough come.

The skipper of ‘Peter Duck‘, one of the smallest craft at Wardleys, pumped up his Avon round-tailed dinghy and rowed out into the river to find this boat bouncing and bucking in the pouring rain. Just hauling himself on board felt like a bridge too far. Ahead lay the prospect of a lonely wet squally fifteen mile sail into a grey world of surging  tidal rips and hazardous sandbanks. 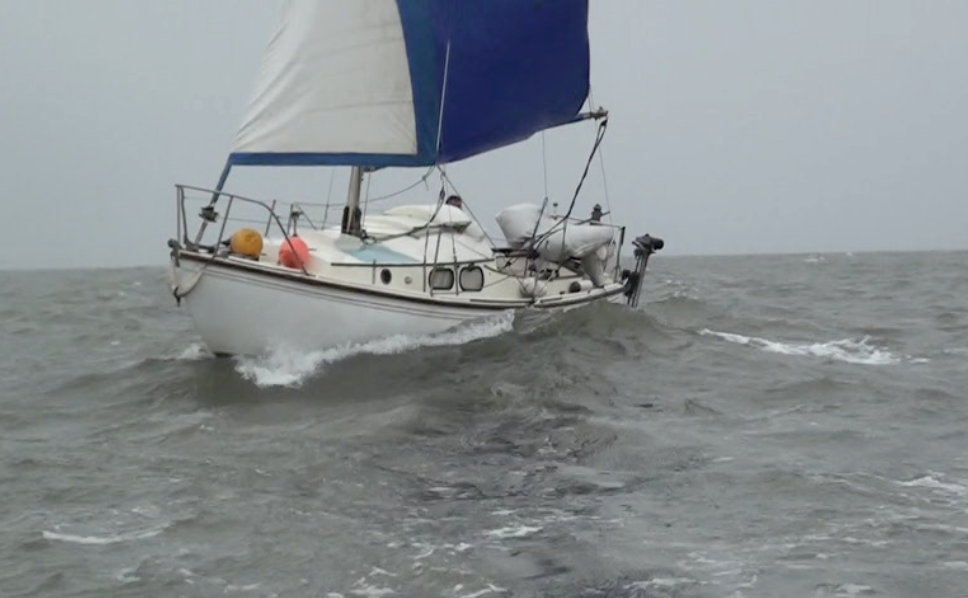 Just at the point when ‘Peter Duck‘ was readying to cast-off, all of a sudden, like a bolt of lightning with blue and white sails, out of the creek and into the river sailed ‘Thunderball’,  at a rate of knots, canvas aloft, pressed hard by the wind.

Two boats were up for it now!

The first leg down the river didn’t take long helped by a following wind and four knots of ebbing tide. The two skippers, both displaying  a  firm-jawed resolve, stood at their respective helms quietly contemplating  the challenge ahead.

Once out at sea and at about the time they reached the Wyre Tower, all sight of land disappeared and a world of grey closed in. In such grim situations, compasses and hand-held GPS units rule the roost and become a skipper’s most prized possessions.

The wind was offshore so the sea-state was initially slight. By the time they reached the halfway point the sea-state began to deteriorate and the wind strength increasing to F5/F6. ‘Peter Duck’ with a broken tiller pilot, heaved-to in order to take some shelter and slurp at a badly slopping thermos cup of coffee. The general direction of drift was roughly on course for Piel Island so all was well. A VHF call was duly made to  advise of the manoeuvre such as it was. ‘Thunderball’ surged ahead and quickly became just a small sail on a large grey horizon.

After ten minutes of welcome recuperation Peter Duck resumed her course, now chasing  some way behind. Suddenly the distance between the two boats shortened. It appeared that ‘Thunderball’ was in some sort of difficulty. She had turned around and seemed to be making her way back. Her sails were flogging, her bow rearing high on the oncoming waves, and her skipper up on deck fighting a problem?

Peter Duck passed close by and suprisingly received the thumbs up from a beleaguered looking boat. It quickly became clear that Thunderball’s skipper was bending some very deep reefs. After all, she had had come out under full sail. The wind by now was a full F6. Still no sight of land. The boats resumed course together, both chomping at the bit, surfing down the following waves.

Eventually land fall was made and in no time the two boats entered the Barrow Channel and were plugging the still ebbing tide to Piel Island. The wind had backed somewhat during the crossing, and since both had turned to starboard, the wind was on the nose. Peter Duck being heavily reefed and towing a dinghy required the help of Mr. Mariner 4HP to complete the final leg to Piel. Soon, both boats were thankfully at anchor  with the wind still rising and the rain still pouring.

Now, before leaving the Creek, it was reported that another of Wardley’s serious sailors and skipper of yacht ‘Sika’  had left a few days earlier en route to IOM and no one had heard any news since. It was thought that chances were her skipper would abort the trip, given the dire weather warnings, and would be holed up at Piel Harbour. This turned out to the case. ‘Sika’ was found at anchor with both crew members alive and safe but a bit little sorry looking. To aggravate matters, Sika’s diesel powered heating system had caught fire but was quickly extinguished by a skipper who’s very thankful of possessing a good sense of smell. An electrical fault in all evidence was to blame.

All Wardleys Creek Club Members were duly ferried ashore and received  the best of Cumbrian hospitality at the Ship Inn. Sheila pulled the pints and Steven doled out some good honest gastro nosh just how us Brits like it (Ah Qui, c’etait exactement ca, les rosbif se regaler!).

The wind blew hard in the night. The tide carried on ebbing, then started a long flood and eventual started to ebb again. All club boats pitched and rocked relentlessly! Sleep wasn’t easy for anyone.

Come the morning the wind had dropped a little, however the sky was now blue and the water turquoise.   Everyone was smiling. The VHF was full of requests of ‘what time do we all start back?’. The excitement of the day ahead was contagious. As the early morning progressed the wind steadily dropped to F4 – the perfect wind for setting sail on Morecambe Bay,  and exactly as predicted by XC Weather.com  The colour grey had been finally banished!

Soon it was time to sail home. Peter Duck was the first to slip anchor closely followed by ‘Sika’. ‘Thunderball’, not wanting rush a traditional eggs and bacon breakfast, departed a little later. Three boats from Glasson Dock, also having braved the weather the previous day, joined in and thus six sails made their way up the Barrow Channel in bright sunshine. What a fantastic sight!

The sail back was perfect. No need for noisy diesel engines or outboard motors. Just white canvas against blue skies,  blue seas and brilliant white foam, and the the gentle creek of rigging taking up the strain. All boats got back to Wardleys Creek safe and sound. So yet again, another great and memorable adventure undertaken by  members of the Wardleys Marina Yacht Club. Bravo!

2 thoughts on “The great adventure that nearly was not. September 2016”