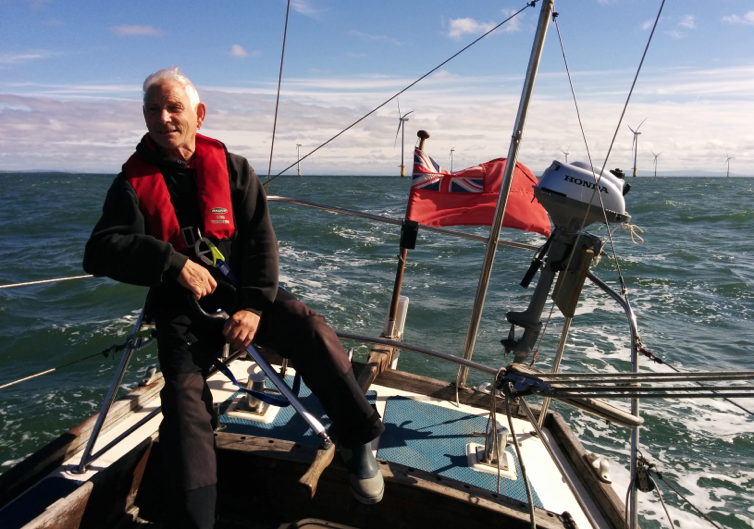 (Three trips to IOM this year!)

We met at the clubhouse and straightaway took our supplies down to the boat. Now, the tide didn’t wait for King Cnut so it certain wouldn’t for couple of Wardley’s Creek sailors. With everything checked and carefully stowed aboard the good ship Sika,  we threw off the mooring lines and with the engine made our way down the river on a fast ebbing tide. The depth gauge was dropping fast, but there was no need to worry because were soon making good progress along the pastoral shores of the river Wyre,  passing the plethora of Knott-End moored boats and, sooner that one would have liked, found ourselves out at sea feeling somewhat exposed in that great wet wilderness. Our plan was plain and simple, which was to make it safely across the shallow and turbulent waters of Morecambe Bay and find the Ship Inn on Piel Island. We picked up a mooring in the lee of the magnificent but daunting ruins of Piel Castle. We watched the endless stream of wind-farm work-boats powering their way up the ‘Walney Channel’, who, when traversing the Piel Island anchorages kindly throttle-back in order to smother their enormous wakes, and who more often that not, wave heartily at any passing sailors and fisherman. A couple of cruisers followed us in. With a fast falling tide, a large cruising trimaran decided to dry-out on the mud between us and adjacent Piel Island Inn, it’s cabin lights appeared to grow brighter as the day slowly faded into night. We suppered on corned beef and beans with lashings of Worcestershire Sauce (the Skippers speciality) and discussed our plans over the best part of a bottle of Scotland’s finest.

The next morning was bright and clear, so we set off early and we crept down channel past Seal Beach. There was too much northerly in the prevailing breeze so a hard-wind-on-the-nose plug up the Cumbrian coast as originally planned was out of the question.  We therefore slackened-off  and set sail for Isle of Man. Douglas was to be our first port of call. Very soon we were in the Morecambe Bay wind farms  surrounded by monster wind turbines with slashing rotor blades. Like the haunting ‘Weaping Angels’ scene from the BBC’s Dr. Who series, every time we had to take our eye of them, say to  look down at our charts to make a calculation, when we looked back up, one of them would be intimidatingly close to us!  Putting primeval fears a side, we could only conclude that we were indeed making good our passage. We were under full sail surging along at six knots.

This is what its’ all about: –

We were able to keep the same tack for about six hours, but eventually had to tack north. At this point in the cruise the skipper spotted a problem with a slack shroud. We furled the sails and motored towards the still distant Douglas Bay.

The promonade’s electric lights grew brighter as we approached.  And similarly the sights, sounds and smells of the waterside grew in amplitude. Finally we tied up in the outer harbour at about nine pm. Whilst we waited for the gates to open to enter the yacht marina, we watched in boyish awe as the ferry ‘Manuman’ pivoted into it’s dock – all lights blazing. Finally on the twelve chimes of midnight, we crept passed the open gate and snuggling-up alongside the North Quay wall. We were both feeling tired.

Tuesday was a maintenance day and I was able to take lunch with a friend from ‘Derbyhaven’ whist the skipper re tensioned the shrouds.

The start of our journey home was dictated by the Manx tides and the 7 knot waterline hull speed of a 32 foot ‘Golden Hind’. We calculated to best slip our moorings at 5am as soon as the road bridge would swing open and give us access to the sea.  After leaving the harbour we checked the charts set a course for home. About three hours of passage the sea started to mount up into series after series of moving walls of water. At times we were struck by great green slabs from over the bow.

Looking beyond our own plight we could see ‘Ben my Cree’ passing well to the south on her long dogs-leg to Heysham, and also see a turbine erection vessel passing astern with three towers and all blades set, with it’s jack legs raised clear of the ocean floor.

We made good time and re-entered the pastoral scenes of the River Wyre with the last of the flood, the coarse shrieks of the sea birds were gradually replaced by the singing of their woodland brethren as we swept further inland. The skipper took back the helm as the opening to Wardley’s creek slid into sight to port. Keeping a strict eye on the ‘leading marks, we threaded a path up the narrow channel passing familiar boats, jetties, resident ducks, and sundry, until the bend in the creek marked the end of our voyage. A beautiful spin-turn was deftly executed, and ‘Sika’  gladly secured to her awaiting berth. Our journey was complete at three in the afternoon.
All in all it was a great four days

From a report by Bob Hoath